The real Budo is love toward protecting (giving protection) of all beings in a spirit of reconciliation. “Reconciliation" (to reach a consensus, rapprochement) is to allow everyone to realize his mission.

I would like the wise and delicate in its essence people to hearken unto the voice of Aikido. Not to correct others but to rectify themselves - their own mind and way of thinking. This is Aikido.

Since the word "ai" (harmony) is like the word "ai" (love) I decided to call my original "Budo" Aikido, although the word "aiki" is an ancient. The word that was used by warriors in the past is completely different from the one I use.

"Aiki" is not a technique which to use to fight the enemy and to win. This is the Path (approach) to make peace with the world and to build with other human beings one family.

Those who tend to create turmoil and conflicts would be defeated in the very beginning.

I've never been defeated, as has been quick the attack enemy. But this has been not because my attack has been proved faster than that of enemy. This is not question of the velocity (speed) in this case. The battle has done over before it begins.

When an enemy tries to fight with me, with my world, he should break (destroy) the harmony of the world. Therefore, the moment in which he decides to fight me, he is already defeated. There is no measure for the time - fast or slow.

Those who do not agree by the fact would not be in harmony with the world. Their Budo is Budo of the destruction. This is not creative Budo. 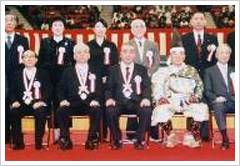 Kobayashi shihan at the center of the front row 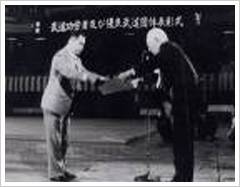 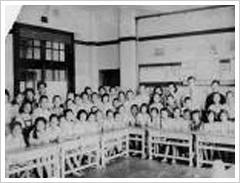 Kobayashi was born on September 20, 1936, in Kudan, Tokyo.  He began his martial arts training with Judo when he was at 5th grade in elementary school.  He entered Meiji University, department of electrical engineering, and started aikido training at Hombu Dojo in 1954.  For a while, he continued both Judo and Aikido. 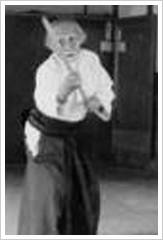 He founded Meiji University Aikido Club when he was a junior.  He was then very much inspired by Aikido, so he became an uchideshi at Hombu Dojo while he was still a university student. 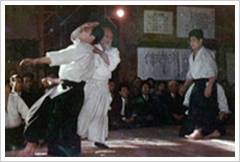 Kobayashi shihan standing on the righ 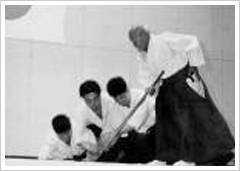 He is senior to Asai shihan of Germany who entered Hombu Dojo when he was a junior high school student. Asai shihan then became a Meiji University student, and became a member of the University Aikido club which Kobayashi founded.

Kobayashi shihan next to O'sensei 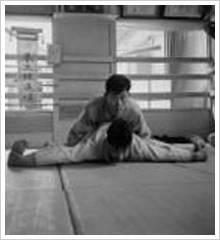 In 1985, after graduating from university, Kobayashi becomes a teaching staff of Hombu Dojo.  He then continued training diligently under the 2nd doshu, Kisshomaru Ueshiba.

Used to be very flexible 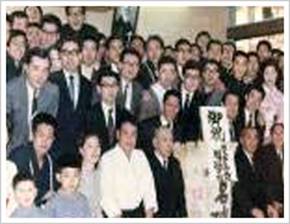 In Nov. 1972, he opened 48-tatami dojo in Tokorozawa, Saitama.  He started to spread aikido in areas around Tokyo-Santama, Saitama, Kanagawa and Chiba.  At the same time, he started training the next generation of Aikido Instructors. In 1975, he sent Shikanai shihan to Brazil.  As Kobayashi accompanied him in South America, he stopped by some part of American continents and felt the possibility of developments in aikido in these areas.  Since then, he frequently visited many areas including Asia and Europe. 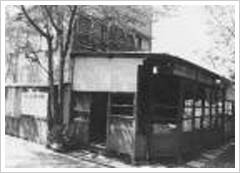 He made diligent efforts in training aikido instructors, such as Kazuo Igarashi, Kengo Hatayama, Haruyoshi Horikoshi, Haruo Ishigaki, Hiroyuki Hasegawa, Takuya Oiwake, Katsutoshi Shirakawa, and many others.  He continues to train aikido instructors, Hiroaki Kobayashi and others, at Aikido Kobayashi Dojo.

The dojo built by the hands of Kobayashi shihan

Today, instructors are being sent to more than 20 countries, including American continents, Europe, and Southeast Asia.

What is Aikido ?
Aikido Club Slavia